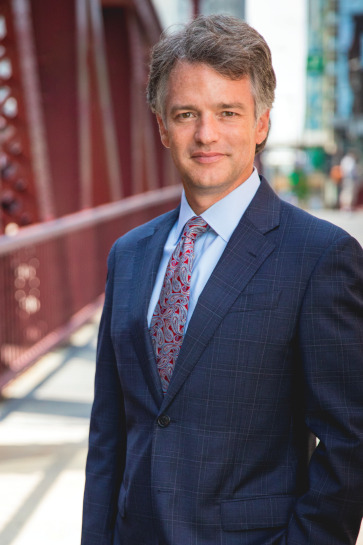 Jay Dahlin’s family law portfolio is anything but ordinary, with his practice focused on international cases, domestic family law cases, and cases where he acts as Guardian ad Litem to children—court-appointed counsel on behalf of the child(ren) in a case—Dahlin has built up a career heavily focused in child custody and advocacy work.

Dahlin made the pivot from international business law, where he gained experience working in federal courts, to family law after growing somewhat disillusioned with corporate litigation.

After he helped facilitate the child’s safe return from Chicago back to overseas, he realized he’d discovered his passion for international family law.

In international cases, Dahlin must operate within two separate and sometimes vastly different legal systems. Ideally, cases proceed under the Hague Convention of International Child Abduction—a treaty that the majority of countries around the world have signed and agreed to, where the courts of the two nations involved will coordinate to determine which country has jurisdiction and where the outcomes of the case will be enforceable. But when dealing with a country who has not signed on to this agreement, Dahlin must navigate within both the U.S. legal system and an alternate overseas legal system where there may not necessarily be the same due process we’re accustomed to in the U.S.

Part of Dahlin’s secret to his success is the artistic lens through which he can view the courtroom. A student of theater in his undergraduate years, Dahlin immediately saw a veiled connection to performing on stage and arguing a case in court.

While actors are given scripts to follow and lines to read, “as an attorney, you’re building your own script,” Dahlin says. Similarly, as an actor strives to convince his audience of the character he’s portraying, Dahlin must also present his case and persuade the judge that his client’s narrative and interests are worth ruling in favor of.

Dahlin’s philosophy centers on pragmatism and setting achievable goals in the case as efficiently as possible.

“I counsel my clients to be rationally pragmatic,” says Dahlin. “I want to take the most direct and efficient path to get you where you want to go.”

Dahlin also recognizes that it’s his responsibility to help his clients understand what the court can and cannot do, particularly in international cases.

His even-keeled personality and ability to adapt with changing fact patterns has helped Dahlin both to persevere through difficult cases and maintain a rational perspective throughout.

Dahlin’s pragmatic and goal-centered approach always keeps his clients’ best interests at heart, and he always strives to leave his clients a little better off than when they first met. And when it comes down to it, shouldn’t that always be the end-goal?