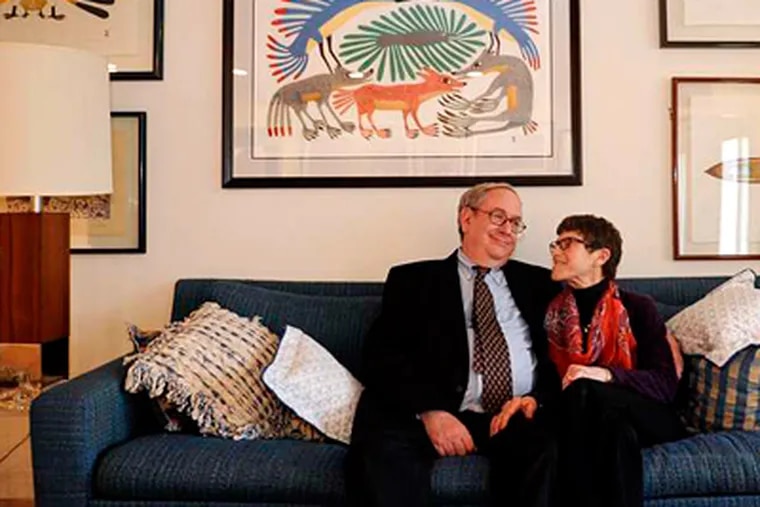 Mr. Hymerling graduated from law school at the University of Pennsylvania in 1969, and, seeing a glaring need for structure and clarity in New Jersey family law, made that his niche.

He joined the Haddonfield firm of Archer & Greiner in 1970, chaired its matrimonial and family law practice for years, and helped the New Jersey Supreme Court create and adopt procedures and laws regarding divorce, alimony, child support, custody, and other important family matters.

“Every New Jersey divorce — and divorce practice — is to some extent influenced by [his] contributions over more than four decades,” said the introduction to Mr. Hymerling’s profile on the Ten Leaders Cooperative website.

“I was there when it all began,” Mr. Hymerling told Ten Leaders. “I was able to act on a vision of what I thought the [family] law should be.”

Indefatigable, Mr. Hymerling was a chair of the New Jersey State Bar Association’s family law section for three years and a member of its executive committee for 30. He told Ten Leaders his greatest professional achievements were cochairing the Supreme Court’s Special Committee on Matrimonial Litigation (1980-81), founding the New Jersey Family Lawyer publication (1983), and sitting on the disciplinary review board for the Supreme Court (1986-2001).

“The matrimonial attorney must be sensitive to every element of the divorce, particularly how the outcome affects children,” he told Ten Leaders.

At home, Mr. Hymerling was a collector. He saved stamps, old books, videos, and Flyers hockey memorabilia. He and his wife, Rosie, a retired but tireless kindergarten teacher, were featured in The Inquirer in 2012 for the 500-piece art collection she still displays in their Haddonfield home.

The couple, who married in 1969, also raised funds and sponsored events for, among other groups, the Philadelphia Orchestra, the Philadelphia Museum of Art, the Symphony in C orchestra, Haddonfield’s Markeim Art Center, and Cherry Hill’s Garden State Discovery Museum.

They were active at Temple Emanuel in Cherry Hill for more than 40 years.

“He was a pretty amazing guy,” Rosie Hymerling said. “He had intellectual astuteness and sensitivity to his clients’ needs. He thought outside the box, and that was pretty exciting.”

Loretta Comfort, a longtime family friend, said, “He was generous, a pillar of the community.”

Born March 5, 1944, in Princeton, Mr. Hymerling knew early that he wanted to practice law. He was formal, opinionated, and tenacious — attributes that served him well in negotiations. “No one wanted to be his adversary,” his wife said.

After Penn, he clerked a year for Judge Herbert Horn of the New Jersey Superior Court. At Archer & Greiner, he won the Saul Tischler Family Law Section Award in 1986 and the Alfred C. Clapp Award for Excellence in Legal Education in 1996.

He taught family law at Rutgers Law School in Camden; served on numerous boards, committees, and subcommittees; and was named “best lawyer,” “super lawyer,” “top attorney,” and “awesome attorney” by legal publications until he retired about five years ago.

“He had a creative legal mind,” said his wife, “and people said he found solutions to problems they hadn’t even thought of.”

In addition to his wife, Mr. Hymerling is survived by son Mark, three grandchildren, a sister, and other relatives. Services and burial were earlier.